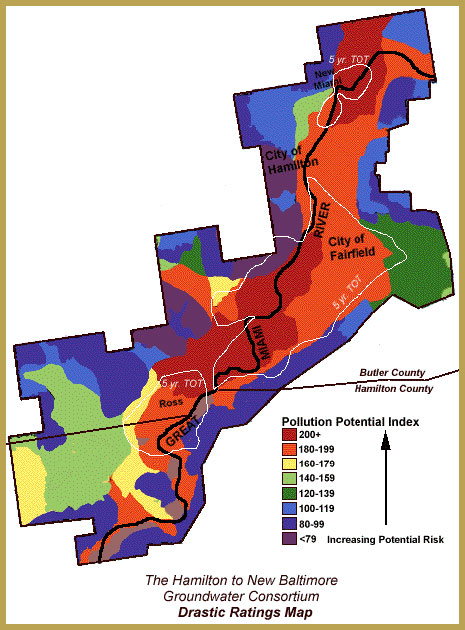 The DRASTIC map of Butler County issued by the Ohio department of Natural resources (ODNR) and the University of Cincinnati in 1991 provides a visual representation of the County’s potential for groundwater pollution. Color codes are used as indicators of the varying degrees of aquifer vulnerability. Red indicates those areas with the highest vulnerability to pollution while purple represents areas with the low vulnerability.

The Vulnerability of an area is based on numerous physical factors of the country and Great Miami Buried Valley Aquifer. These factors are:

(D) Depth to Water – Depth from the ground surface to the water table;

(R) Net Recharge – the total amount of water leaching into the aquifer on a yearly basis;

(A) Aquifer Media – the type of rock material found in the aquifer system;

(S) Soil Media – influencing the amount of recharge that can move through surface soils;

(T) Topography – refers to the slope of the land;

(I) Impact of the Vadose Zone Media – affecting the attenuation and retardation of a contaminant as it is introduced to the uppermost layers of an aquifer system; and

(C) Conductivity (Hydraulic) of the Aquifer – a measure of the capability of an aquifer to transmit water.

Combined, the evaluation of these characteristics provides the basic for determining vulnerability of a groundwater system to contamination.

Vulnerability to groundwater pollution is consistently higher within the boundaries of the aquifer than outside the aquifer. More significantly, the potential for pollution is highest in those areas of the aquifer where groundwater production yields are the highest, specifically the main valley of the aquifer. This relationship is primarily due to the fact that the very characteristics that make the Great Miami Buried Valley Aquifer such a favorable source of water, including well-sorted sand and gravel and permeable surface soils, also provide favorable conditions for the introduction and migration of contaminants. Hamilton’s North and South Well fields both lie in the areas with the highest vulnerability for pollution. Consequently, programs implemented to minimize the potential for contamination take on a added importance in these areas.