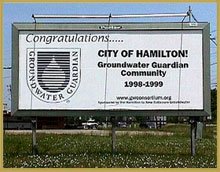 The Hamilton to New Baltimore Groundwater Consortium consists of seven public and industrial groundwater producers/users in southwest Ohio. Members are:

Collectively, the Consortium produces over 61 million gallons per day (MGD) for approximately 314,000 residents in southern Butler and northern Hamilton counties as well as a variety of industries and other water users.

The Consortium was established in 1967 out of concern that the siting of a major groundwater production facility by Cincinnati Water Works (CWW) in the City of Fairfield would threaten local groundwater supplies. Since its inception, the Consortium’s primary focus has historically been water quantity. Beginning in 1980, however, the Consortium began actively looking at groundwater quality issues as well.

HOW THE CONSORTIUM OPERATES

All SWPP activities are funded annually by Consortium members on the basis of how much water they pump and their status as a public or non-public water supplier. All Consortium contributions for the Source Water Protection Program come from the general operating budgets of each member. The Consortium also periodically receives grants for public education activities.